The 13 th of October 2019 was a red-letter day at IGNITE. Excitement levels were at a peak and the students could hardly contain their curiosity. Well nobody could blame them …..the myth of SRISTI has always had that effect on its students.

SRISTI – the yearly flagship event conducted at IGNITE to bolster the creativity of our NATA & JEE-ARCHITECT aspirant students and to give an avenue to showcase their skills was being conducted and true to its name and reputation this year, new ideas and concepts would be created from scratch.

The management at IGNITE always believes that Architecture can never be completely understood by sitting in a classroom mugging up equations and reading books. The true magic happens when you come out of your shell letting your imagination loose. This early realization led to the inception of the event called SRISTI.

This year the workshop was conducted by renowned architects Ar Midhul and Ar Aneesh.

Ar Midhul who is a well-known architect is also a rising superstar in the field of photography having several famous projects to his credit.

Ar Aneesh on the other hand who is infamous for his maverick style and oratorial skills besides being a fantastic architect has a way of leaving the students in awe every time he speaks.

The main theme of the workshop was automobile design and prototype manufacture using scrap materials, but what made it interesting was that the base inspiration for such a design had to be drawn from the infamous Pushpak Vimana (the amphibious vehicle of the dreaded Ravana).

The students were divided into 5 groups and were given clear directions and instructions as to how to go about their project. They were given time until 5 in the evening to accomplish the task.

Each member was assigned a particular task, while some were entrusted with designing the prototype on paper others were tasked with converting these ideas into an actual model and so on.

Major objective for such an exercise were 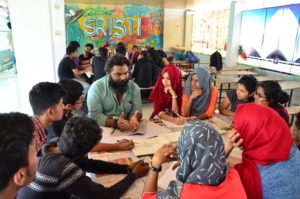 While they went about their task, events such as a face painting competition were being held just to add icing to the cake. 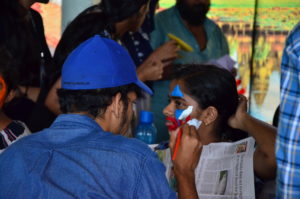 A creative mind needs a canvas without boundaries to truly reveal itself before the world .Keeping this in  mind we at IGNITE asked for volunteers to show up the day before SRISTI to help us with the preparations. Little did they know that we had arranged a rare opportunity for them here at IGNITE.

Under the careful mentoring of young and dynamic architect Ar Annmariya they would go on to create a masterpiece on Mandal art with a scale range of an entire wall repainted exclusively for this purpose.

The entire experience was truly remarkable because 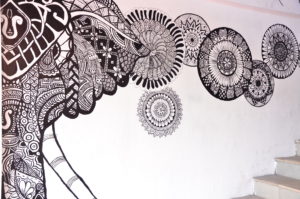 Besides the workshop, SRISTI marked the showcasing of the inspiring works created by our students in the outdoor sketching classes provided earlier and also the poster designing competition held in connection with the event.

In the evening Parents were invited to bear witness to their children’s remarkable works on display on the walls of ignite. The pride in the eyes of these parents made it completely worth all our efforts.

The smallest details make the greatest difference, which is exactly why IGNITE has consistently been ranked the best NATA coaching center in Kerala over the past 5 years while consistently producing toppers in JEE,CEED,UCEED and other competitive exams. Having a network of students spread all across the globe our alumni always come back to us grateful for the training given not just in the classroom but for preparing them for their future careers.

“One of the great beauties of architecture is that each time, it is like life starting all over again.” – Renzo Piano

Search Anything
Close
× WHATSAPP US